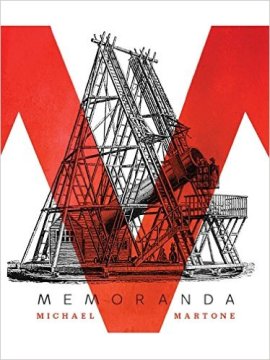 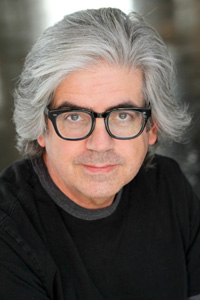 Michael Martone’s little—quite literally—chapbook, Memoranda, does a good amount of work considering how much empty space is found on every page. With each ‘chapter’ focusing on another soul in the workforce, readers are left with a detailed, sometimes grimy view of society, as the readers take a glimpse into various aspects of the daily lives of different professions.

Structurally, this book is full of very, very small chapters, each averaging out to about forty to fifty words. These chapters are short in the extreme. The content of each follows a central theme of working life. That is to say, each chapter is a small peek into a different world of work. While one chapter may look at a Forest Service Forester, another follows a stenographer.

One of the things to be loved about Memoranda was its pace, which lets the reader read more in one sitting, compared to longer chapter books. Contrastingly, at least for me, this also meant having to go back and reread parts as I would begin to pick up pace and stop actually reading the content. And that’s where the stories actually take place: the content. Of course, the short style does have its place in the text: the shortness of the chapters can be seen as representative of the fact that there are so many different jobs that could have filled the pages. There isn’t possibly room for everyone, so Martone uses short chapters to quickly delve into one, then come back up for air almost immediately, before going back for another. It’s what Martone puts in each of those chapters that brings the book to life. Little splices such as “black box isn’t black but orange not orange more blood red not a box so much but not not missed” offer a look into the horrifying job of trying to transcribe contents of a cockpit recorder after being recovered from a wreckage site (13). The emotion Martone  fits into the few lines that each chapter contains is a deep can of sardines, packed in so tight that at first glance the reader can miss part of it. This was another part of the book that I loved: the little things really do matter in Memoranda.

Indeed, these little chapters pack quite a punch most of the time. Of course, every positive has its negative. While short chapter lengths are a great way for the reader to get quick, clean snippets of someone’s life, they also lend themselves naturally to being read too quickly. The chapter on the surveyor, which discusses “this fungus, 2,000 acres, like the antennae we’re installing” is a quick line that doesn’t hold much at first glance (6). As with the stenographer’s story, there is more to it that that. The size of the fungus is crazy! The surveyor’s account of an “Unexpected Environment Impact” has a massive amount of imagery associated with it (6). The only problem with that imagery is that Martone only gives the chapter two sentences to force the imagery into the reader’s mind. When a reader starts to pick up momentum, the little details can be easy to miss, and with chapters this short, everything is a little detail. Some readers enjoy this, but I prefer being able to at least get the gist of the surface meaning on the first round, then go back for the between-the-lines metaphors and imagery. Unfortunately, I just don’t get that with Memoranda. Indeed, this book seems to be asking its readers to read at what may be a different pace than they normally would in order to fully enjoy it.

Even still, Martone shows how a few good words can have more meaning than a hundred weaker words. When actually noticed, the imagery and emotion in stories, such as the when the climate analyst says, “Knowing more, we know less […] that blue cloudbank, disguised as smoke, it turns out, is smoke,” which offers insight into the realization that the climate is changing in a negative way,  is beautiful and insightful, but can also be easy to miss depending on your reading style (9). My main complaint was that this book forced me to read in a way that I normally don’t, but I think the content and skillful writing done by Martone more than makes up for the personal quarrels I may have with Memoranda. Because of this, I highly recommend reading it at least twice (to ensure nothing goes unnoticed).

Michael Martone has written several chapbooks as well as works of nonfiction and fiction (including a fictitious autobiography). Martone was born and grew up in Fort Wayne, Indiana. He attended Butler University and graduated from Indiana University. He holds the MA from The Writing Seminars of The Johns Hopkins University. Martone has won two Fellowships from the NEA and a grant from the Ingram Merrill Foundation. His stories and essays have appeared and been cited in the Pushcart Prize, The Best American Stories and The Best American Essays anthologies. He is currently a Professor at the University of Alabama where he has been teaching since 1996.

About the author of this post:  Nicholas Drazenovic is currently a senior at North Central College and is a co-editor of 30 North. He is studying English with a concentration in Writing, as well as Computer Science. After graduation, he hopes to pursue a career in either technical writing or software development.