With Lincoln in the Bardo, George Saunders tells the melancholy tale of President Abraham Lincoln’s struggle to balance grieving his recently deceased son Willie with holding together a nation that’s trying its hardest to tear itself apart. Simultaneously, Saunders tells the journey of Willie Lincoln’s soul as it travels through a sort of limbo state between life and death – the bardo, as the Tibetan people would call it. It’s a story that’s as bizarre and fantastic as the President’s is sad and humbling. And Saunders writes it all in brilliant technicolor prose that burns itself into the brain.

At first, the style will throw many readers off: Saunders notes the speaker of the paragraph at the end of it, and chapters are quite short with some only lasting a few lines, like a kind of rapid-fire epistolary novel. Quotation marks are almost entirely absent, and tangible strings of conversation are hard to track down. At times it seems like the characters address the reader more than anyone else on the page. Yet the reader can quickly distinguish between the characters’ voices, and eventually quotation tags seem unnecessary, like the human appendix. Once the style feels familiar, the rest is nothing but pleasure.

The novel breaks down into two main parts: Willie’s (more accurately, his soul’s) story and Abraham’s. Willie’s soul’s story is told by several deceased fictional characters that are also spending time in limbo. These characters include the printing press professional Hans Vollman, the homosexual romantic Roger Bevins III, and the Reverend Everly Thomas. Vollman and Bevins have the most interesting relationship; their petty bickering and stubbornness is funny, but also carries a deep-seated sadness with it, like Vladimir and Estragon in “Waiting for Godot.”

Several other characters pop in and out, but they don’t do a whole lot to move the main events forward. They don’t take anything away, either. Each character, even if they appear for no more than a few paragraphs, contributes some little detail that adds to the constellation of beauty that is Lincoln in the Bardo. Saunders gives us the death story of nearly (if not) all the souls we encounter in limbo: everything from a razor blade to the wrists, to a drunken carriage-trampling, to a nose-smashingly high fall from a window. The means of death often reveals more about that character than any details pertaining to their previous life, a clever narrative trick that spices up exposition and makes the introduction of new characters a treat and not a task. Many of the souls in limbo have bizarrely distorted persons, reflecting some aspect of their character. Roger Bevins III grows multiple sets of arms, ears, noses, eyes, etc. when reminiscing about the pleasant sensations of nature. Hans Vollman’s penis is perpetually swollen (for reasons you’ll have to read to find out) and sometimes grows so large that he has to hold it with both arms so he doesn’t trip over it!

These bizarre features of the bardo may read as excess to some, but they work. Especially when put up against the incredibly somber delivery of the President’s story, told through excerpts of dozens of historical documents and primary accounts. Saunders pulls short passages and sentences from these various texts and combines them to make a parallel narrative to Willie’s posthumous journey. I never would have thought a method as ambitious as this could produce poignant and cohesive prose, but somehow it does! The historical-collage chapters read so effortlessly that, if I didn’t know any better, I would be convinced it was just Saunders executing his normal prose.

These chapters offer crucial details, such as impressions of Willie before he died, descriptions of the emotionally broken President visiting his son’s grave, hints of Mary Todd’s mental fracturing, political critiques of the President’s wartime moves, and grisly accounts of the carnage on the battlefield the day after battle. Even though these chapters have been arranged to create a new narrative, they still have an air of historical accuracy. And it’s this idea, the sense that this really happened, that grounds the wackiness of the bardo sections and makes the whole novel a deeply moving and utterly human affair.

To anyone looking for a novel written in vivid prose that doesn’t let up for one second, look no further. In Lincoln in the Bardo you’re sure to find a wildly original story told in a wildly original way that somehow, against all odds, seems faintly familiar at heart. It’s the most human novel about dead men with giant penises wandering a Tibetan purgatory you’ll ever read. 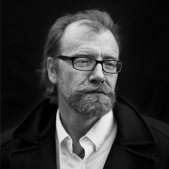 About the Author: George Saunders was born in Amarillo, Texas, but grew up in Chicago. He completed a degree in exploration geophysics from the Colorado School of Mines. He later completed his MFA from Syracuse, where he also met his future wife, Paula Redick. Saunders has had various works published in The New Yorker and Harper’s Magazine.