Laura van den Berg’s Find Me explores the mind of Joy, an orphaned cough syrup addict, as she experiences life after the potential end of American civilization.  The novel opens during Joy’s stay (or imprisonment) in a hospital searching for the cure to a disease that wipes the memories of its victims before taking their lives. Eventually, Joy escapes and wanders in search of her biological mother in a dystopian landscape. Although the novel seeks to be a more distinctive narrative in a sea of dystopian novels, Find Me maintains a sub-par impression upon the reader. Ultimately, van den Berg confuses and continually loses touch with her readers through spoon-feeding themes, disclosing unnecessary information, frequently using clichés, and distracting the reader with a jumbled organizational structure.

Throughout the novel, van den Berg spoon-feeds her audience with overstated messages of profundity. Rather than allowing the reader to dissect the possible meanings of the work, such as the importance of belonging and being found, one is bombarded by statements such as, “To be looked for is to matter” (223). The theme of the novel is not open to interpretation and discussion. Thus, the narrative feels simple and interest diminishes.

Along with overstating themes, van den Berg frequently reveals information that neither affects its plot nor its message. In the second half of the novel, a character is hinted to possess psychic or predictive abilities (176). One would believe that such a profound disclosure would affect the premise of the plot, but it did not affect any element of the novel. It was not relevant at the time of its revelation, and it continued to stay irrelevant. If the author’s intention was to add depth to the character, or to garner interest, it did not appear as such. Sequentially, the disclosure of irrelevant information invoked feelings of disappointment and confusion.

Peppered throughout Find Me, clichés particularly common to young-adult dystopian novels frustrate the reader. Towards the beginning of the novel, as Joy is reliving a memory where she watches reruns of “The X-Files,” she states, “I’ve never liked the things girls my age are supposed to” (34). This overused statement not only turns off the reader, but feels mildly condescending. What are 19-year-old girls supposed to like? Why must Joy declare how she’s “not like other girls”? One cannot help but interpret Joy’s declaration of difference as a method of implying superiority to stereotypically feminine women. Furthermore, as the novel continues, Joy engages in sexual activity with her roommate in the hospital and does not shower for days to hold fast to his scent. Her desperate hold on her moments with him has a poetic appeal, but feels empty; reactions to physical love such as this have been overused in romance novels and films. As a result, the many clichés of Find Me contribute to its lack of distinction in the dystopian/post-apocalyptic genre.

Along with relaying random information and overusing clichés, van den Berg distracts readers with the confusing structure of the novel. Although it is predictable, with one chapter relating the present and the next revealing the past, it distracts from the plot. The reader can easily get lost along the way by forgetting the most recent events and constantly attempting to retain information about the past. Some of the chapters reveal disturbing qualities of Joy’s past that add emotional depth to her narrative, but others feel random and unnecessary. For example, the larger portion of chapter 18 is dedicated to stating facts about Norway and the origin of the disease that has ravaged America. While the disease has arguably caused the events of Find Me, and Norway is the home to a minor character, the information given about the two falls flat, thus unnecessarily interrupting the progression of the plot. Further assisting in the disruption of the novel’s flow was van den Berg’s consistent use of three-dot breaks. For example, within the span of the five pages of chapter 40, three-dot breaks appear 10 times. The excited thoughts that Joy experiences could easily have been encapsulated in paragraph form. The information instead reads as overexaggerated and encourages the reader to rapidly skim through it in anticipation of the last page. The chapter, along with the many others that exude the same love of scene breaks, resultantly reads as choppy, scattered, and lacking in cohesiveness. Laura van den Berg’s writing style ultimately detracts from the reader’s consumption of her work.

Although Find Me loses touch with its readers, it still has some charm. Van den Berg’s use of imagery was imaginative. When Joy experiments with an unknown drug, she states, “my brain is a blue jellyfish that has crawled out through my ear and is hovering somewhere along the roof of the tunnel, happy to finally be free of the body” (225). An experience with drugs may prove difficult to convincingly describe, but van den Berg has accomplished it without seeming stereotypical or overdramatic. Additionally, the language was well-written; the tone felt conversational, yet still possessed gravity and poetic qualities in the right places. The positive elements of the overall work do not cover for its flaws, but they are still present and worth considering.

Fundamentally, explicitly stated themes, excess information, the overwhelming use of clichés, and a distracting writing style effectively contribute to the lackluster impression of Find Me. If the novel had better confronted its themes without overstating them, readers would be able to fully appreciate the novel. However, its audience instead becomes disinterested and lost in a book about the act of finding. 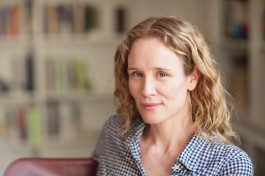 About the Author: Laura van den Berg was raised in Florida and earned her MFA at Emerson College. Find Me is her first novel, which was selected as a “Best Book of 2015” by NPR, Time Out New York, Buzzfeed, and others.

About the Author of this Post: Ashley Suslowicz is a freshman at North Central College majoring in English and minoring in Sociology. After finishing her undergraduate studies, she plans to attend law school near Chicago. She loves Star Wars, Game of Thrones, and coffee.